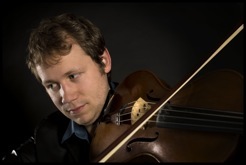 Violist Emlyn Stam is active as a chamber musician, soloist and orchestral musician in the Netherlands and throughout Europe. For seven years he was assistant principal violist of the Residentie Orkest in The Hague under Neeme Järvi. Other orchestral work has included appearances is as a guest principle with Philharmonia Orchestra, the BBC Welsh National Orchestra and the Toulon Opera. Emlyn Stam has made numerous appearances for Dutch radio and television, he has appeared as a soloist with the Amsterdam Symphony Orchestra and the Schönberg Ensemble. He has also performed at numerous festivals such as the Kuhmo Festival in Finland, Sound of Stockholm, Connect Festival, Giverny Chamber Music Festival, International Chamber Music Festival Utrecht and Grachtenfestival Amterdam. Chamber music performances have included concerts with the Parkanyi Quartet in the Concertgebouw and regular appearances with the Ysaÿe Trio of which he is a founding member. The trio released their first cd. in 2013 on the DRC label. Emlyn is a founding member of the New European Ensembleas well as the ensemble’s Artistic Coordinator.